Chimney flue coveris a good investment, sealing an unused fireplace or any unused flue at the top of the chimney can be a good economic move

Prior to installing any fireplace chimney blockers make sure to clean the flue or you will have unwanted creosote smells in your home.

And once you have blocked off your chimney it’s a good idea to put a warning plate inside the firebox to stop someone from unknowingly lighting a fire in a fireplace chimney that has been decommissioned.

Call for price to start saving money on your heat costs

We can seal off your unused chimney flue cover and stop moisture entry and heat loss..

Please feel free to contact by email at flue.guru@gmail.com 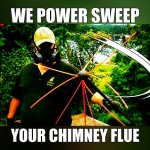 Call us to professionally inspect and clean your Wood Fireplace, Fireplace insert or Wood Burning Stove thoroughly with our 'state of the art' Rotary Chimney Sweeping Tools 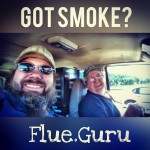 Chimney and Appliance cleaning is often required MORE frequently than annually - depending on your fuel choices and methods of burning.

Please feel free to contact by email at flue.guru@gmail.com

Serving Greater Victoria BC from Sooke to Sidney!

Victoria BC, like many communities, has many unlined or poorly lined masonry chimneys from pre 1960’s era and we get many – often indignant questions – about them and why they are “no longer considered safe”.

The answer is they were “never considered safe” and required constant cleaning with stiff fines resulting if the chimney was not cleaned on schedule. Homeowners and tenants were required by law to clean their unlined wood burning systems and chimneys monthly to avoid the disastrous chimney fires which often burned half the village down.

Things got a little better around 1920s when masons started to plaster the inside of the chimneys (on more affluent projects) when erecting it to create a better seal and smoother surface – however without rain caps the interior “plaster flue liner” soon eroded and fell out unnoticed, leaving the dangerous cracks and crevices between bricks open to once again catch flammable deposits. The plastered seal that once had prevented combustion air from entering through the mortar joints during a chimney fire was also lost, increasing the intensity of the blaze.

Current BC Law stating that “chimneys need to be inspected annually and cleaned as necessary” assumes the wood burning system is a code complaint, properly lined and structurally sound system. “Cleaned as necessary” does not mean annually and falls back to the old days when the onus was on the owner and/or operator to check and maintain their systems on a much shorter cycle. We often see clogged chimneys in good systems occur within weeks when operators are inexperienced, uninformed or misinformed and/or fuel is improperly selected, seasoned or utilized.

Lining an unlined chimney system with clay liners is possible but expensive. Lining a masonry fireplace chimney with a stainless steel liner is a difficult mixture of two different systems and not advised. Usually the best solution in the case of a fireplace is to add a fireplace insert with its own insulated liner system.

Also, adding an insulated stainless steel liner to an existing wood stove or fireplace insert that has been venting into a masonry chimney, creates a “closed loop” flue vent and is a good option as often chimney fires occur in the hidden cleanout area or smoke shelf of this type of outdated system which does not allow operator to control an unexpected blaze by starving the air supply.

When relining any system, care must be taken to clean the unlined chimney thoroughly to prevent ignition in spaces in between.

Here is a sample video showing how we can clean a wood stove system from the bottom up. Methods vary based on each individual installation.

Check out our various Chimney Cleaning Tools and Methods

My "How To" Chimney and Wood Burning , Home Repair Videos... Vanessa's Gourmet Chef Videos and some others... 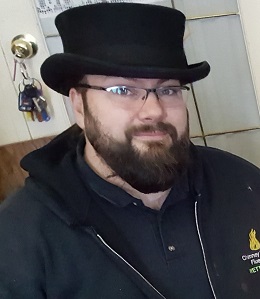 We love the Better Business Bureau and have been members since 1980 with our various businesses.

Hi…just a note to say how much I am enjoying my wood stove now that you cleaned it and taught me how to properly light it.

Thank you for your patience and guidance. What sounds so minor is sometimes a major issue for some people, and you took the time to explain how my stove works, and what it needs to make the lighting and working quick and efficient. I am now enjoying my stove whereas before, I was more scared of the thing when all I got was smoke. Now I LOVE my wood stove!!

If you ever need my referral I would be more than happy to provide it.

Thanks very much, Dean. I really appreciate your persistence with this leaky chimney!

Hercule Poirot ….the detective in the Agatha Christie stories….I think you should add that name to your title - all the wind and rain we've had over the past week and it remains DRY upstairs! Thanks again, Dean, and best wishes for Christmas and 2016. 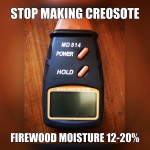 We added this cute counter Feb 1 2016 to see where our visitors came from.